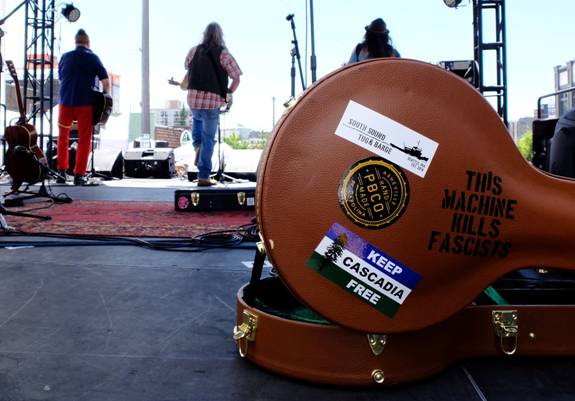 Short Interviews with the Bands

Performers South Sound Tug and Barge, Mega Bog, Swedish Finnish, Carrie Akre and Danny Newcomb, and the Dusty 45s. Impression It was noon, where California Avenue intersected with Oregon St. on the north end of the West Seattle Junction. The music was starting after the hip-hop dancers, and fans and their families gathered in front of the stage, which was sunny and comfortably warm and far enough away from the distracting smoke and smell of grilled meats. Behind the stage, in the break area with fold down chairs and stacks of bottled water, there was an atmosphere of collegiality and courtesy. Musicians put down their equipment and greeted each other warmly, whether they were old friends or meeting for the first time, and offered one another easygoing encouragement to allay a normal amount of uneasy apprehension. The stage staff had been working hard the last two days, but they were calm, attentive, and helpful, never overbearing or obtrusive. This was the perfect summer festival. Interviews South Sound Tug and Barge 12:00 PM Steve Duda: banjo and vocals; Charley Rowan: accordion and vocals; Scott M.X. Turner: guitar, harmonica, resonator, bodhrán, and vocals. Learn more about South Sound Tug and Barge and find their music at http://www.southsoundtugandbarge.com/. What is your connection to West Seattle? Steve: We all live in West Seattle. Charley: I met up with Scott at the Shadowland’s open mic night. Scott: We owe thanks to Patrick Smail and Shadowland’s Starlite Singer/Songwriter Showcase on Tuesdays night. This was the real incubator. Steve: It’s exciting for us. Last year we were busking in front of Easy Street Records, and now we are on the main stage. 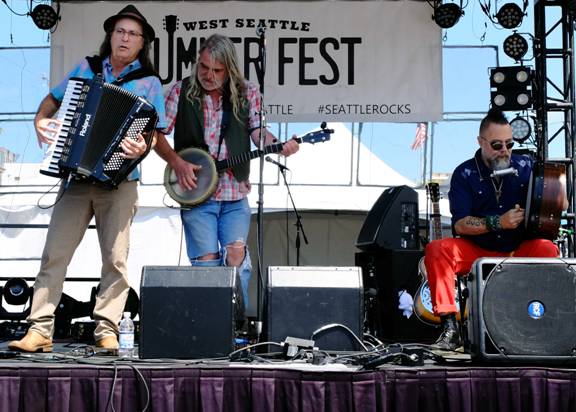 Left to right: Charley Rowan, Steve Duda, and Scott M.X. Turner How would you define your band? Steve: We’re a political band. We oppose and resist what is right in front of us. We’re acoustic, with punk rock energy, and play old songs. You don’t hit people over the head with a message, but people love music. We changed the words slightly to Which Side Are you On to make it more relevant, and 12 Gates to the City can now point to the current refugee crisis. Scott: It is also about the music, from living in Brooklyn and being actively involved against development, I learned that waking up and thinking only about the political struggle meant I couldn’t think about the band. Steve: We like to think we play punk, but we play old songs with a banjo. And an accordion. Charley: The accordion was once the most popular instrument in America. I play the keyboard and picked up the accordion, and then was playing Brazilian forro music. Where do you like performing? All: Parliament! Steve: Though we wouldn’t say no to an offer for a world tour.

View of South Sound Tug and Barge from backstage. Mega Bog 1:00 PM Erin Birgy: voice and guitar. Learn more about Mega Bog and find their music at https://www.megabog.com/ If I said you were setting your poetry to a Fender Stratocaster, would you agree? (Smiles and laughs) I play a Fender Cyclone. I like Alice Notely’s free form poetry and am reading Laura Riding’s poems – she was Robert Grave’s mistress. When I am alone, and I am hardly ever alone, words come out and I write, and when I am with people, music happens. 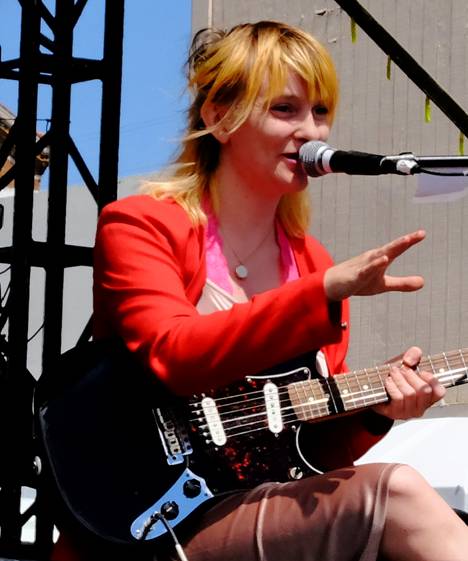 Erin Birgy with her Fender Cyclone Where are you from? I drove here today from Missoula, Montana. I’ve lived in Seattle, but now I am in Brooklyn. Brooklyn is where everybody is trying hard; it is extremely competitive, and there is good, amazing art. Scenes overlap and divide, and they have their own capitalism. Seattle offers a supportive community. My chosen family lives in Seattle, and I am grateful that iji was a major influence. I gained a lot of experience in Seattle with no focus. What about music and the Internet? It can be classist: while anyone can listen to music on the Internet, not everyone has a computer or the resources for unlimited streaming, and the libraries offer only an hour of computer use. Where next? I will always be playing music. I’ll be at Hidden City records in Vancouver, B.C. on Tues, [July 19, 2017] then Wed. [July 19, 2017] at the Old Fire House Teen Center in Redmond, Wa. Then Los Angeles, Portland and the UK . I might even eventually live in L.A. and make music for the movies. My friends live in Glendale and Highland Park, and I am drawn to Sun Valley because of the horse neighborhoods. Swedish Finnish 2:00 PM Rod Moody: vocal and guitar; Tina Anderson: drums; Scott Sutherland: lead guitar; Andy Hoggarth: bass. Learn more about Swedish Finnish at https://www.facebook.com/SwedishFinnishBand/ (Speaking with Rod primarily) You have a long standing West Seattle relationship? My grandparents moved here in 1923 from Indiana. I’ve lived here, except for a while in Queen Anne and the east coast. I have worked at Easy Street Records for nine years. I volunteer at the West Seattle Historical Society and did an inventory of local Junction businesses, and using old city directories, determined what used to be in the buildings here. West Seattle is a vibrant community, with lots of bands and lots of opportunity to see them.

Left to right: Rod Moody, Scott Sutherland, and Andy Hoggarth How about the band? We are practically all neighbors in Morgan Junction. Makes getting together for rehearsal easy. You have a remarkable drummer. My wife Tina never missed a show in 20 years, then she took drumming lessons. Tina’s style is similar to Michael Clarke’s of the Byrds. 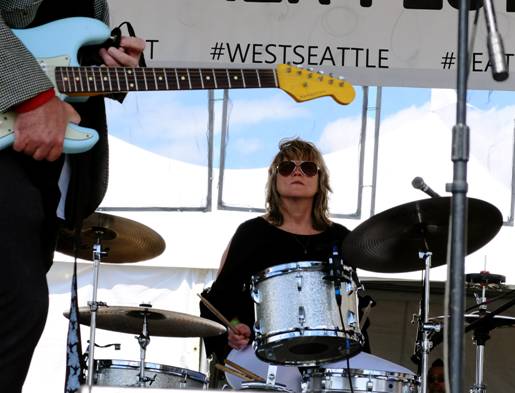 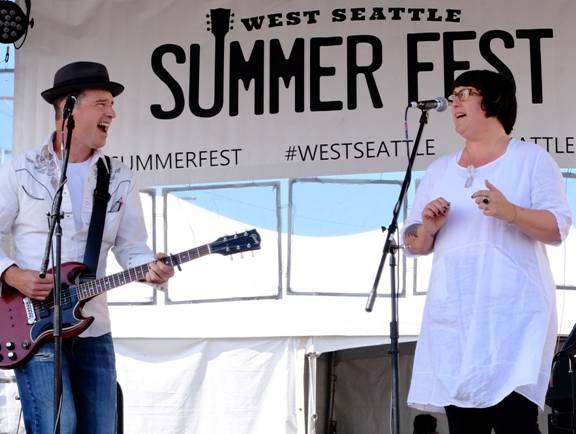 Danny Newcomb and Carrie Akre You’ve moved from Seattle to Minnesota and back? Carrie: Yes, originally from the Tri-Cities, I lived in West Seattle, Admiral and White Center, then Minnesota, and now live in Tacoma. I feel grateful to have explored Seattle when Seattle was affordable, but now it is crowded and expensive. I miss people here and seeing friends, but Tacoma is accessible and friendly, and has good clubs, 6th Avenue, and also has that great underdog feeling. Danny: I grew up in North Seattle, and I love West Seattle. It reminds me of how Seattle used to be. Can you describe how you arrive at a song? Carrie: Music is personal and from within me, but it comes from nowhere into my psyche. It involves an artistic intuition, and there are a lot of things going on, and it creates a lot of art. 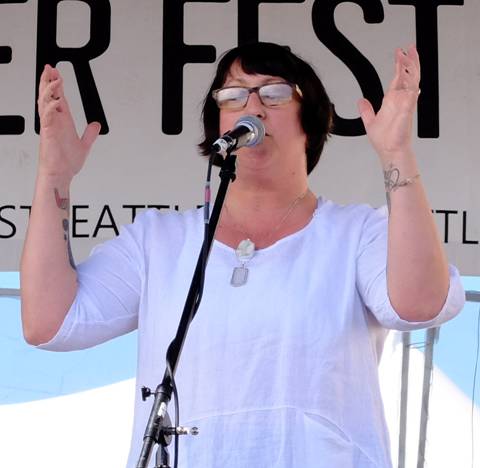 Carrie Akre Danny: I live on a farm on Vashon Island, and I get up early, practice for an hour, and write a new idea every day. Sometimes they are good. I think it is important to have a routine. Farm? No wonder you’re in such good shape! Danny: No, no, not really. But I was in an accident recently, and the doctor said that I was doing well because I didn’t have an office job and was used to moving my body in different ways. Favorite venues? Carrie and Danny: Tractor, Columbia City Theatre, Bijou, and the Royal Room. What’s coming up? Danny: A record release performance on August 11, 2017, at Easy Street Records. The Dusty 45s 4:00 PM Billy Joe Huels: band leader, singer/songwriter, trumpet, guitar; Jerry Battista: lead guitar; Robin Cady: upright bass; Kohen Burrill: drums; William Stover: piano. For more about the Dusty 45s, go to http://www.dusty45s.com/. 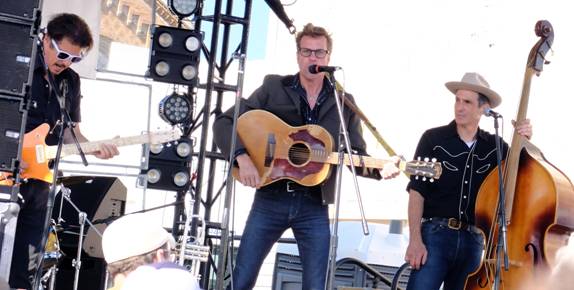 Left to right: Jerry Battista, Billy Joe Huels, Robin Cady (Speaking with Billy Joe primarily) I think you’re holding on your own against Louis Armstrong on St. James Infirmary. I cannot even begin to compare myself to Louis Armstrong. What I like to think I’m doing is channeling him. I also draw inspiration from Buddy Holly and put them all together. When did you pick up the trumpet? That was my first instrument when I was young. We play rock-a-billy, and I’ve played surf and twangy style guitar music, but I wanted that Tex-Mex sound, so I had my parents send me my trumpet. Are you from Seattle? I grew up on a farm in southern Illinois, went to college in Illinois and Bozeman, Montana. I was dating a girl in Vashon, Island, and moved here in 1989, and lived in the University District. Most of the band lives in West Seattle; Jerry Battista lives in Everett. We practice two blocks from here and record our albums on 46th Street. This year, the Dusty 45s celebrates 20 years of playing music. Where do you like to unwind in West Seattle? Some of the favorites are West 5 and Parliament. A Seattle music memory? Seeing Nirvana playing at release party at the Peaches record store. I bought the Nevermind CD then. 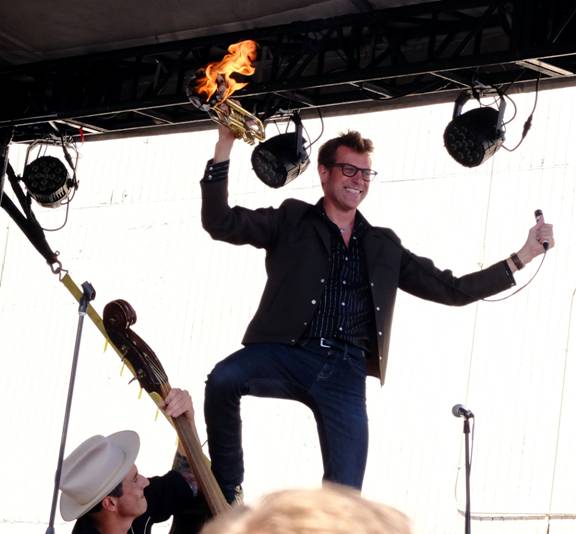 Left to right: Robin Cady and Billy Joe Huels Where are the Dusty 45s Going? After shows in Seattle and eastern Washington, we’re playing the Wild West Fest, at Drunky’s Two Shoes BBQ, in White Center, August 13, 2017, from 2PM until 6PM. There’s pony rides! Then we head off to the east coast, from Boston to Knoxville, with an annual show in Nantucket Island.]]>
Posted in Events, Junction News and tagged Summer Fest
← Community Artwork Dedication & CelebrationThe Maldives & Ken Stringfellow, In-Store at Easy Street →