Seahawks win? Fret not, there are some great places to yell your heart out and root for your team.

You can find your corner spot and watch the game from their big screen TV. A Terrible Beauty‘s Irish comfort food like their Limerick Caramelized Peach Pork Chop is delicious! Hit up some pizza at Talarico’s. They will have game-day specials so grab big slice of pizza, drinks, hang out at the bar, meet more Seahawks fans and cheer on.   [caption id="attachment_15876" align="alignright" width="320"] 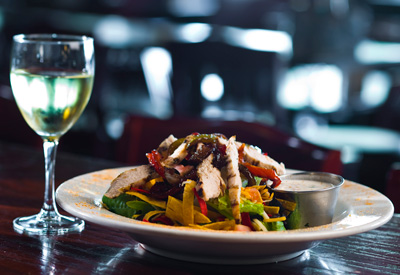 Chicken Fajita Salad with Wine at Elliott Bay[/caption] Elliott Bay Brewery‘s happy hour will be happening during the game which starts at 3pm this Sunday. While you’re there, try their Pairing Specials which consists of a scrumptious Elliott Bay dish paired with a nice cold brew. For the 21 and older crowd, you can sit anywhere in Shadowland and still have a great view of the game. Happy Hour will also be ongoing during the game this Sunday. If you’re feeling Tex-Mex and want a laid back atmosphere, Matador is the choice. Sit by the fire and enjoy their fresh fish tacos as well as some Cucumber-Jalapeno Margarita’s. For the beer aficionados The Beer Junction has Seattle’s largest beer selection with 1,300 different domestic and imported beers from over 50 countries and 35+ rotating taps to enjoy. Bring in outside food or have it delivered, watch the game with your friends and try some beer you’ve never had before. Staying Home? If you decide to stay at home to watch the game, a few places below could help if you’re not feeling like making a mess in your kitchen. Quadrato will be offering game-day specials too so make sure you follow them on Facebook and get updated on their specials for the day.   [caption id="attachment_15871" align="alignleft" width="200"]

Velvet Elvis at Cupcake Royale[/caption] You can never go wrong with a dozen cupcakes from Cupcake Royale. Order in advance and try their cupcake of the month, Velvet Elvis – A Cupcake for a King! Brown sugar banana cupcake swirled with peanut butter chocolate frosting. Whatever you decide on doing this Sunday or the rest of the playoffs, let’s keep rooting for our team! Go Hawks!  ]]>
Posted in Junction News
← A Fresh Healthy StartEdie's End-of-Lease Sale →