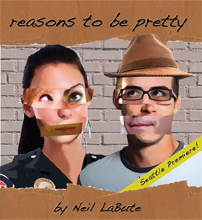 Neil LaBute’s reasons to be pretty (Seattle premiere) at Arts West from September 8th through October 2nd! Nominated for the 2009 Tony Award for Best Play of the Year! Directed by Katjana Vadeboncoeur. “Greg’s tight-knit social circle is thrown into turmoil when his offhand remarks about a female coworker’s pretty face and his own girlfriend Steph’s lack thereof get back to Steph. But that’s just the beginning. Greg’s best buddy, Kent, and Kent’s wife, Carly, also enter into the picture, and the emotional equation becomes exponentially more complicated. As their relationships crumble, the four friends are forced to confront a sea of deceit, infidelity, and betrayed trust in their journey to answer that oh-so-American question: How much is pretty worth?” *Adult language, themes, and situations. Recommended for ages 16 and older. Photo: Arts West]]>