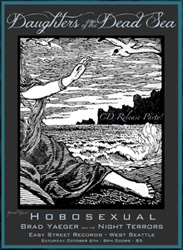 Daughters of The Dead Sea CD Release Party at Easy Street Records (West Seattle) on October 6th! This All Ages Show starts at 8pm with a $5 cover. “Daughters of the Dead Sea are an all-female rock/punk trio hailing from the depths of West Seattle. Their music is pure, raw passion and energy in its most primitive form, laced with early nineties Seattle sound. These girls will punch you in the face, then rock you to sleep at night. The Stranger raves about Daughters of the Dead Sea (formerly Deaths Three Daughters), comparing them to early Sleater-Kinney and Bikini Kill, but “with more complex sound” and praises the singer’s “Corin Tucker-like warble.” Their angst-ridden, passionate performances have earned them much underground buzz and shout-outs on KEXP.” Also on the bill are Hobosexual and Brad Yaeger & the Night Terrors! Easy Street Records West Seattle Store is located at 4559 California Ave SW, Seattle, WA 98116.]]>