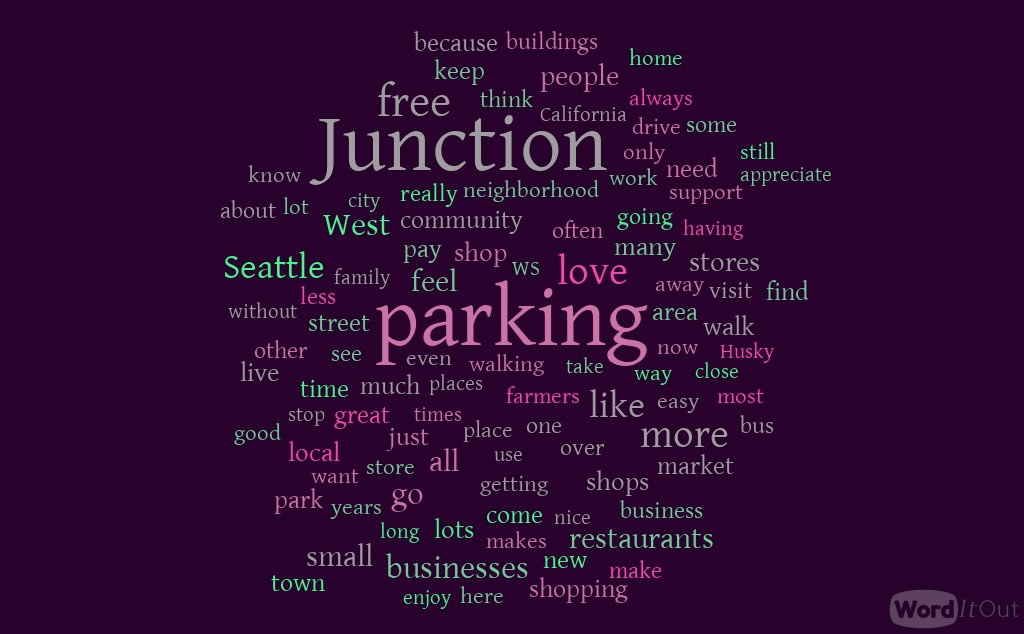 It is Important to remember  that this profile doesn’t  necessarily match all West Seattle residents; those that took the time to complete the survey are probably more apt to visit the Junction and be interested in it.   Figure 1: Years lived in the Area          Figure 2: Usual Number of Visits per Month

Main Reason for Visit When asked to choose from a list of main reason to visit the Junction:

Those that mentioned “free parking” in this question were slightly more likely to have lived in the area over 20 years than the average participant (31%).  However, they did not differ from the average in how often they visited the junction.   Prompted Response to Potential Loss of Parking   When asked directly later in the survey how much they agreed with the statement “I would not come to the Junction without free parking”: Additionally, of the 1,219 open-ended responses, 127 people (10%) noted that the current lack of parking availability affects their propensity to visit the junction.   Figure 4:  Prompted Response to Potential Loss of Parking, by Number of Monthly Visits

Underlying Attitudes About the Junction Respondents also shared to what degree they agreed with other attitudes about West Seattle Junction (see Figure 5.) There was overwhelming support for statements that spoke to WSJ’s atmosphere, as opposed to Mall options: Additionally, of the open-ended responses, 217 people (18%) noted how much they value local businesses over national chains. And 117 people (10%) cited the diversity of businesses as one of their main reasons for coming. However, there are some negative attitudes to keep in mind:

Conclusion It is impossible to predict behavior with a survey; respondents cannot accurately predict what they may do if WSJ cuts back on free parking. There are clearly strong feelings about the issue, and the association and businesses will need to prepare for angry reactions if parking is reduced. Many respondents added comments that they currently avoid the area due to lack of parking spaces and that paid spots could make it more accessible. On the other hand, there is also a great deal of support and warm feelings toward the Junction, including appreciation for the small size and diversity of businesses in the area. Marketing messages for the Junction can also take advantage of the clear convenience and favorable atmosphere.   Appendix A number of people made recommendations around the parking situation in their open-ended responses. Below are some verbatims that were worth highlighting. Do it in steps “If you must go with a parking zone, do it in steps — test period perhaps — to collect feedback, fine tune.  I hear a “free zone” around businesses is being considered, that’s smart.  Who is causing the issue–those who “live in the Junction” but don’t have parking spots because the city didn’t force developers to provide?  Thus, pushing those cars to neighboring areas…I wonder.” Have a shuttle “We need a local “shoppers shuttle” that just loops West Seattle available in lieu of the regular Metro routes. It may help with congestion on the 55, 50, 128 and C Line. Shoppers, students and commuters wouldn’t have to struggle, or scuffle for seats during peak travel conditions. It could run from Alki to Westwood, hitting The Alaska and Morgan Junctions in between.” Monthly permits “I shop for groceries, hardware, gifts, housewares, art supplies, eat out, get coffee, treats, drop mail, use legal, financial and medical services in the junction – and greater WS area. It’s routine. I usually can find parking in lots or street, although I find myself timing trips sometimes for “non peak” times, if I can. I like the junction, I make an effort to “shop local” (haven’t been to a “mall’ in years). But, truthfully, the free parking is important and part of the character of the business district. It’s a hassle to feed parking lot pay stations, but if the lots do go to pay stations, maybe a local residence of greater West Seattle could be eligible to by a “Monthly Junction Parking Permit” – for the lots. Monthly use. For a fixed fee. Still keep the lots limited time, whatever it is now. Except maybe longer in evenings.  (I actually don’t know the limits because it’s ever been an issue for me). The Monthly permits could be like a Park Pass, a ferry pass, a bus pass. Just an idea. I would pay for knowing I have the convenience of parking here and there as I go for the number of times I use the junction. (as opposed to the lots turning to only pay stations which I may never use or shift some of my shopping habits away from the junction). So, monthly pass – 8 x $2.5 = $20/mo. maybe.” Need more handicap spots “The reasons I don’t frequent the junction anymore are parking is annoying. To difficult for a quick trip when I can just go to Burien and easily park. The other is handicapped accessibility. Parking isn’t easy to find, sidewalks make maneuvering wheelchairs difficult and stores aren’t very accessible either. Not enough room for a wheelchair or scooter. The people who have supported the junction for many years are no longer able to shop there because it can be scary trying to maneuver through when you have disabilities. My mom is no longer comfortable going there even though she has been shopping there most of her life! Even when there wasn’t much to go to.” Block Parties “I’ve filled out the survey previously- so did not answer all questions this time. But wanted to add a suggestion that I’ve always hoped would happen at the junction. I grew up in a town where every Thursday night, during warm months, the main street was closed down, restaurants brought tables and chairs outside (similar to summer fest) and did “dining under the stars”. It would be so awesome if we could do this, even once a month, on the same block as the farmers market, during June, July, August, maybe September. So great for that small town feel.” 10-15 minute spots “We love the junction, love the free parking but we need more of it given we’ve grown so much.  It might be useful to have some 10-15 minute shops for takeout pickup. I would love to see more grab and go breakfast places, weekend brunch places and takeout places.  I don’t get some of the shops in the junction, they seem a bit dated.  I also find it odd with the number of real estate offices we have.” Word Cloud This word cloud is based on all open-ended responses. The bigger the word, the more it was mentioned.